I wish I could tell you where it comes from. Half the time I’m not even really aware I’m doing it. Actually the awareness comes after I hit ‘ENTER’.   You know like when you’re running late, and bust your ass to get to work. Only to get there out of breath and your supervisor says, “Oh we’re fine-you could have stayed home.” Its like I black out or something. And even then I have the chance to go back and delete it. But I don’t.

I find myself daily with a quick remark or retort to things. Some can cause a chuckle, others can be down right mean. Its really hard to define, ‘am i funny or just a mean person’.  It could be an exercise me with me writing. But on facebook, some posts just hit a switch. And I don’t mean in a bad way-it just like I said happens. Could be just how my mind works.

People could make innocent posts, harmless posts and inspirational ones. It doesn’t matter, if I see it and the wheels get to grinding-something in my happens and I post.

Or maybe sometimes life, or at least mine-has had so many twists and plot turns-I feel like I’m on a sitcom. Am I only the only one to wake up and feel like Jim Carey in “The Truman Show”?

No need to all raise your hands at once. I’m fully secure in myself in accepting I’m crazy. But just in case they come to take me away-I’m requesting a room with a view. Preferably of a very attractive nurse or nurses. Or a window is fine……even if it is drawn in crayon on the white wall.

I can’t be the only one who sometimes thinks, that we’re entertainment for the Big Man upstairs. Or even the tv entertainment for the occupants of heaven. How ironic would it be, that your life and all its antics could be the favorite sitcom of someone above. Or hell, below for that matter.

Could you handle the fact that after a hard day of praising the Lord, some little old couple is going home to watch you on television?

For all you know, purgatory is chock full like a doctor’s office. Or even an emergency room. People of all creeds, races, and religion all waiting to be judged. And while they wait, there’s a big screen tv displaying anyone of our lives for their entertainment.

They always says ‘you meet everyone for a reason‘. You ever wonder how you became friends with some people? Like using “Seinfeld”  for example-we all have a George, Elaine or Kramer in our lives. Whether we choose to it admit. Hell you can even use ‘Friends’ as a example. We could be someone’s Ross or Rachel etc.

Wait, let me think for a moment-there has to be at least one or two black sitcoms from all my years of television watching I can use? Hmmm. “The Cosby Show”, “A Different World”,  or even “Family Matters”-although I don’t anyone would want to be anyone’s Steve’s Urkel by choice.

I’m probably the only one that says something funny, and waits for a laugh track to occur. Or at times constantly looking around to see if you can catch a camera man. Or even a boom mic hanging from somewhere. Maybe its just me. Or maybe some of you feel this way about your life-but don’t wanna say it. For fear of them carrying you off in a cute little fashionable white jacket that makes you hug yourself.

As much as I’d like to go on and on,  according to the sponsors I’ve killed enough time. And the little red light is blinking-letting me know my time is up. So I’ll have to come back another time and go further.

Oh and they would like for me to tell you.  ‘We will continue….the movie ‘Dark Chronicles of a Creative Mind’….after this public service announcement’. 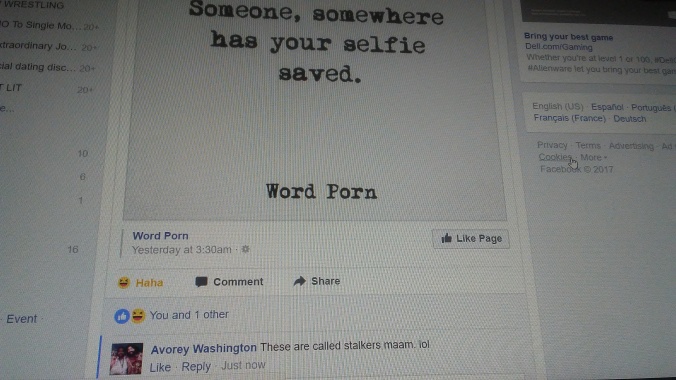 One thought on “Life with Avorey #2”